How to samba like a malandro in Rio de Janeiro

“Back erect! Chest up! Hips firm!” Carla Campos bawls over the wild tumult of samba drumming convulsing the speakers in her smart Ipanema dance studio. “Stop bobbing up and down! Stop wriggling! You’re not a chicken. You’re not a worm. You’re a man! You’re a malandro!”

Ah, the malandro — the archetypal bad boy, the con artist, the ladies’ man, the hero of all the early samba songs of Rio de Janeiro. My first ever samba dancing lesson is nearing its end, and I feel like a failure. But with a puppeteer’s deft touch, Carla teases me out — cranium, sternum, belly, back pulled along opposing vectors and — hey presto! — I’m dancing ramrod straight, chest puffed out like a cockerel’s, a heady masculine energy flooding my veins. It’s quite a hit, quite a high — a thrillingly alien sensation for a slouching, bespectacled, booze-addled British scribbler like me.

My lesson has not only introduced me to a new side of myself (Chico, shall I call him, my inner malandro? Or Nelson, perhaps?). It’s also been a great workout, and a lesson in the need to stop thinking and just do things in life. How else, in the space of a single hour, to persuade one’s hips, arms and feet to move regularly at a frantic pace but according to different rhythms, in different directions while also smiling brightly and embodying the spirit of a mythical Brazilian folk hero? The fact I managed something approaching this feat for even a few seconds towards the end of Carla’s class is a big kick in itself.

A uniquely Brazilian fusion of older African and European elements, samba was born at the turn of the 20th century in Rio de Janeiro, and soon became a country-wide craze. Later, it spawned a thousand variants — most famously, the whispering, shimmering, jazz-inflected tones of Bossa Nova. It’s Brazil’s foremost cultural export, and you can learn to dance it more or less anywhere on the planet. But there’s nothing like experiencing it in its home city, where it remains the soundtrack to everyday life. 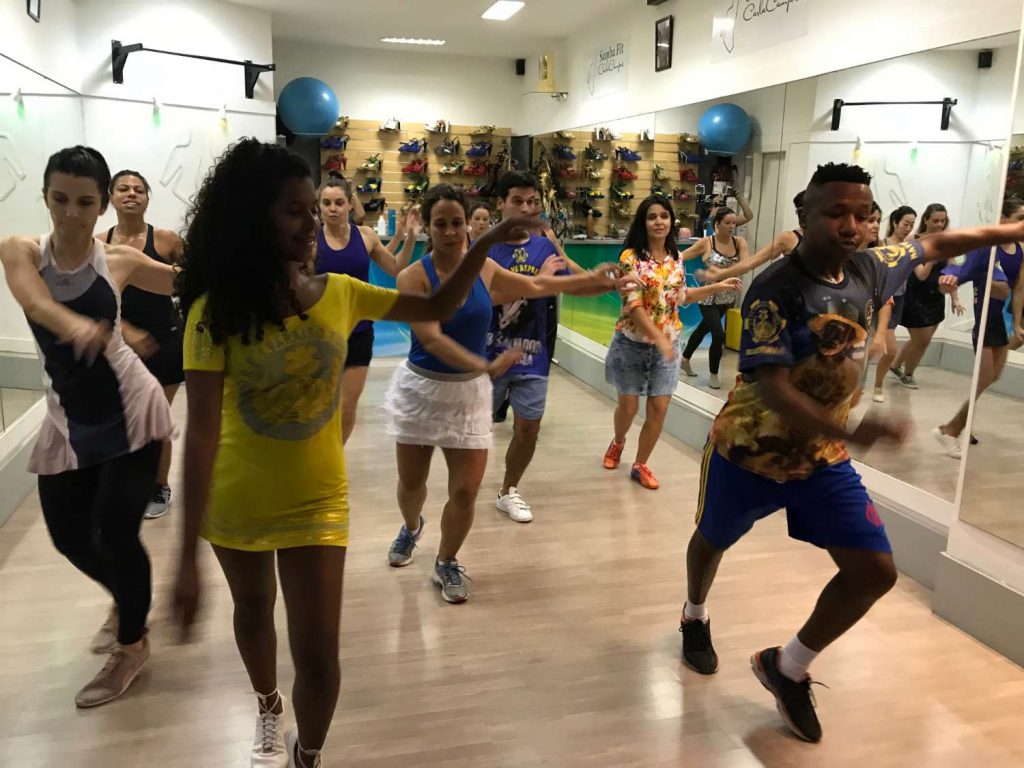 My guide is Dehouche’s own Tom Robinson, who has fantastic connections with the city’s multifaceted samba scene. On learning about my newfound obsession with my nascent inner malandro, he and Brazilian sambista, the very stylish Keyla Bergamazi lead me first to the

latter’s original stamping ground: the grand boulevards of Lapa, a bohemian neighbourhood and former red light district where the samba clubs that flourished in the 1930s are still going strong.

Most splendid is Clube dos Democráticos, a huge, flamboyantly ornamented art deco dance hall where, with Keyla’s prompts, I manage once more to execute something resembling a basic samba step — or at least, so she tells me — creating a wondrously buoyant sensation of weaving, ducking and diving through the miraculous polyrhythmic web of the music. At the Vaca Atolada — a tiny, neon-lit neighbourhood bar, rammed with locals — I watch the band’s percussionists conjure this up with a fascinating array of unfamiliar instruments. Grandpa is the surdo, a big bass drum that throbs and thrills like a gong; baby is the cuica, a little thing you rub to produce a hilariously exhilarating squealing and groaning sound like the distress call of a small but sharp-toothed jungle animal.

In search of samba’s roots, we head to the Pedra do Sal, one of the gargantuan black volcanic rocks that punctuate Rio’s supremely sensuous topography. It looms a volcanic pebble’s-throw from the city’s former slaving dock, in the heart of an area known as Little Africa.

“I’d give anything to have been here in the 1900s,” cries a bright-eyed Keyla. “That’s when Rio’s best popular composers used to get together in Tia Ciata’s house, just over there. She was a priestess of Candomblé, the Afro-Brazilian religion, and threw the parties in which Pixinguinha [a Brazilian composer] and his friends invented the modern samba style. Imagine hearing these sounds at the moment of their first creation, dreamed up by those masters in the white heat of inspiration!” 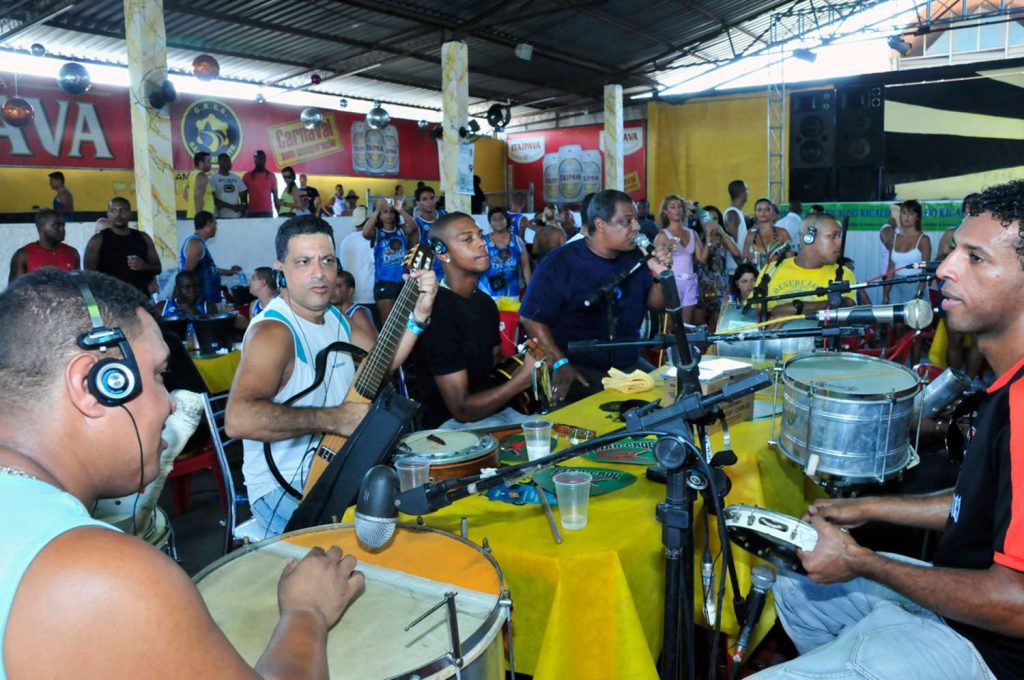 Keyla’s caipirinha — bought from a street stall — spills across the cobbles as she twirls in celebration across the pretty old square below the rock. There’s an old-school, al fresco samba party here every Monday night, and the band is now in full flow. I love the place — the crumbling, colourful old colonial houses, the fabulous street art, the lethally strong cocktails, the close heat of the tropical night.

And so, from the humble shrine of samba’s miraculous conception to its sprawling modern mothership — the Sambódromo, a vast, open-ended stadium on the fringes of downtown Rio, where the Samba Parade — the climactic event of the city’s world-famous carnival celebrations —

is held each year. It’s the biggest show on Earth — a multi-gazillion-dollar live spectacle involving tens of thousands of samba dancers, professional and amateur.

I’m in Rio at the wrong time of year, but I insist, nonetheless, on a consultation with top carnival costumier Sandro Carvalho. Versailles meets Almodóvar in his grand first-floor showroom, with its red-velvet sofas, towering gilt mirrors and mannequins bristling with feathers and jewels. Some of these outfits are so outlandish (and so expensive) that they resemble art, or the most recondite conceits of high fashion — and, indeed, Sandro spends a month each year sourcing cloth and crystals in Paris, and notes the cross-pollination between Rio carnival style and the work of designers such as Thierry Mugler and the late Alexander McQueen.

Still, samba remains firmly rooted in working-class culture, through the so-called samba schools, neighbourhood outfits that together make up the annual Sambódromo parade, contributing thousands of participants each and competing to win prizes for music, dance and the spectacular design of their floats. I attend a community party at the headquarters of the Unidos de Vila Isabel school, a cavernous gym-like space in a dull suburb far from the touristy glitz and glamour of Lapa and Ipanema.

There are few thrusting young malandros here. It’s a relief to launch into a little unselfconscious dad dancing, safe among the jiggling hordes of grannies and toddlers, sharing plates of the fortifying feijoada (a ubiquitous Brazilian stew of pork and beans) that the school doles out to all comers in exchange for the sort of undying personal loyalty reserved elsewhere in the world for football teams and millenarian religious sects.

“What’s good about the samba school?” I ask Gloria, a 72-year-old lady, between numbers. “I mean, why do you come?” She looks at me with pity and surprise, lost for words. “Oh, there are classes — dance classes, capoeira classes, parties… like this. There’s a… a kindergarten…”

“No no,” her friend Vitoria interrupts, authoritatively. “Samba…” She pauses. “Samba is life.”

Tom Yarwood, is a British Travel journalist and editor of The Week’s travel section